2.Tom Johnston and The Doobie Brothers 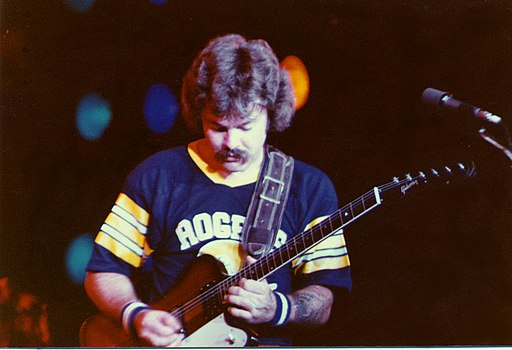 In a previous article about the music of California and the West Coast sound I wrote about the Eagles. The other pillar of that sound is The Doobie Brothers. A “doobie" is a “joint", a marijuana cigarette, and in that way the group’s name epitomizes California culture of the 1970s. When the group took form in the 70s, it found its groove as an ensemble of black and white musicians, with dual lead electric guitars, two drummers, and three-part harmonies. The lineup reflected California itself.

In terms of sound, the band fused southern rock elements with funky, soulful elements, which resounded with listeners around the world. Its early hits include “Listen to the Music" (1972), “Long Train Runnin’" (1973), and “China Groove"(1973), which quickly made The Doobie Brothers one of America’s biggest rock acts.

3.Michael McDonald and The Doobie Brothers

By the mid 1970s, Tom Johnston, one of the founders and guitarists of the band and also its lead vocalist, was beginning to suffer health problems due to constant touring. When he became unable to tour with the band, Steely Dan alumnus Michael McDonald was brought in as his replacement.

Minute by Minute
Buy on Amazon

The addition of McDonald would change the band’s sound dramatically, from a powerful, driving guitar sound to a soft rock/adult-oriented rock sound infused with R&B influences.

The band’s 1978 album Minute by Minute was a massive success, and the single “What a Fool Believes" was a No. 1 hit on the Billboard Hot 100, and later received both Song of the Year and Record of the Year at the 1980 Grammy Awards.

4.From Breakup to Reunion

The Doobie Brothers constantly toured throughout the 70s with the support of many great musicians, but the lifestyle took its toll on the band. In 1982, they decided to hold a farewell tour as a thank-you to its fans before disbanding.

After a five-year hiatus, the band would reunite in 1987. Since then, it has remained active with a number of changes in the lineup, but with core members Tom Johnston, Patrick Simmons, and John McFee.

The Very Best of the Doobie Brothers
Buy on Amazon

This compilation features 33 tracks spread across 2 CDs in chronological order, centered on its 70s hits but featuring songs from its debut to its 90s releases. Listeners will come out with a good overview of the evolution of the band’s sound, from the Tom Johnston era, to the Michael McDonald era, to its post-reunion (with Johnston, sans McDonald) 80s and 90s era. This is a 2016 Japanese remaster of a compilation originally released in 2007.

This 1983 live album features choice cuts from the band’s 1982 farewell tour. At the time, guitarist and vocalist Patrick Simmons—then the only remaining original member of the band—was looking to step away from the band after years of constant touring and recording. The band decided to go on one last hurrah as a thank-you for its fans before disbanding. Founding member Tom Johnston rejoined the band for the last two tracks on the album.

The Ultimate Collection
Buy on Amazon

This compilation is the best introduction to the soulful, husky voice and mellow soft rock sounds of Michael McDonald. The tracklist features McDonald’s solo hits as well as six essential tracks from his time as a Doobie Brother. Highlights from this feel-good collection include a Motown cover, “Yah Mo Be There", a duet with late R&B singer James Ingram, and On My Own, a duet with Patti Labelle.

The Definitive Collection
Buy on Amazon

This compilation brings together the biggest hits of smooth, refined jazz-rock band Steely Dan. Steely Dan has long been a staple of classic rock radio, and thankfully this collection includes not only the band’s hit singles but its radio favorites as well. Also included are two tracks from the band’s two albums from the 2000s.

This box set is comprised of Donald Fagen’s four solo albums—including his masterpiece The Nightfly—and a disc of 10 rarities. While Steely Dan’s worldview has always been sardonic, Fagen’s solo work has a certain nostalgic warmth, partly attributable to the jazzier elements that play even a more prominent role here than in Steely Dan’s work.

When considering American culture and music, it is important to have a general sense of the difference between the East Coast and the West Coast. (Middle America and the South have their own distinct culture and traditions, but that is a topic for another day.)

The East Coast is the birthplace of the United States, where it made its stand against Great Britain and in a larger sense, the European continent.

One of the major goals of the American Revolutionary War was economic independence (“no taxation without representation”), but in terms of the culture, the East Coast remains firmly connected to its European roots to this day.

This can be seen in the architecture, in the fashion, and even in the language. People from the East Coast, whether they admit it or not, have an admiration for European culture—and the sentiment can teeter into envy and on occasion, a sense of inferiority. The region is called New England for a reason.

As a Californian, reading the op-ed pages of the New York Times or The Washington Post—both bastions of East Coast intellectualism—can sometimes make me feel that the East Coast is as removed from the West Coast as Great Britain was from the thirteen colonies almost two and a half centuries ago. Then there are the famous Ivy League schools, which have clear British and European style leanings when it comes to the architecture and churches, not to mention fashion.

Meanwhile, on the other side of America, L.A. (Los Angeles) and S.F. (San Francisco) two bastions of West Coast/Californian culture, are shaped by the confluence of people with wildly different cultural backgrounds.

The City of Angels is powered by Hollywood dreams and decadent celebrity culture; S.F. is the cradle of hippie culture and home to one of the largest LGBT communities in the world.

The ICT movement that has grown out of Silicon Valley—a little more than half an hour’s drive from S.F.—was fostered by these myriad factors.

Likewise, the music of The Doobie Brothers and Michael McDonald—as well as Steely Dan and Donald Fagen (Fagen and Walter Becker are from the East Coast, but Steely Dan was formed when the duo relocated to L.A.)—have been greatly shaped by those geographical and cultural forces.

When Michael McDonald joined The Doobie Brothers in the mid 70s, the band’s sound morphed from powerful guitar-driven rock to softer pop-rock. Some argue that’s when the band “jumped the shark".

Regardless of how you feel about the band’s change in direction, when it came to musicality, the presence of Michael McDonald elevated both The Doobie Brothers and Steely Dan to another level.

Japan also has Michael McDonald to thank for being the singular, throaty voice of the genre that came to be called “AOR" (adult or album-oriented rock), which took the country by (quiet) storm in the 1980s.

Thus, West Coast sound and musicians like Michael McDonald are considered “AOR" music—which sounds vaguely (some would say explicitly) derogatory, but for the Japanese, the term is one of fondness. In the U.S., the genre came to be referred to as “yacht rock" in the 2000s. A yacht, of course, is a small, light watercraft often used for leisure.

The yacht imagery comes from the fact that musicians lumped in this genre invariably have a song about the sea or sailing. More generally, their music is not built for the nightclubs or the rugged open road; instead the mellow vibes are well-suited for a pleasure cruise off the West Coast. The music has a uniquely Californian looseness.

At the same time, the musicality brought to bear is anything but loose. Or rather, the recordings are largely brought to life by first-rate jazz studio musicians who shaped the “soft" sound through their impeccable chops. Stylistically speaking, the music is comprised of a rock and roll foundation with elements of pop, disco, R&B, and jazz. The result is sparkling, smooth, and light enough that it never overstays its welcome. In my mind, that’s basically California in a nutshell. Finally, many of the recordings—specifically those of Steely Dan—are known for how well engineered they are.

As for lyrics, you’ll find none of the unbridled anger or angst or resentment found in rock, nor will you find songs of passionate love or rebellion. Instead, many of the songs are about the foolishness of the human condition. The Doobie Brothers’ “What a Fool Believes" is a song about a young sap oblivious to the fact that a girl isn’t giving him the time of day; Michael McDonald’s “I Keep Forgettin’" is about a thick-skulled man in a state of perpetual confusion as to his relationship status. Then there are Steely Dan lyrics, which are dark and cynical, but presented in a clever, often obtuse way that puts them in contrast to the light musical tone.

This fusion of looseness and perfectionism, lightness and heaviness, white culture and black culture may seem at face level like a recipe for disaster, but yacht rock is a miracle in harmony and balance that I would argue could have only come to fruition in the California soil—or rather, off the California coast. Whenever I feel homesick for California, I know it’s time for some yacht rock.

One Step Closer
Buy on Amazon

At this point in The Doobie Brothers oeuvre, gone is the driving guitar sound that defined its early output; here the band is instead defined by the singular sound of Michael McDonald. It should come as no surprise that this is the last original album the band released before breaking up in 1982. While the album as a whole is hardly well regarded, the song “Real Love" is without a doubt one of the band’s masterpieces.

If That’s What it Takes
Buy on Amazon

This is Michael McDonald’s first solo album, released in August 1982 after the breakup of The Doobie Brothers. I submit that in terms of cross-racial appeal and clout, there was no more important voice in American pop music at the time. The hit “I Keep Forgettin’" was later sampled for the rapper Warren G’s hit “Regulate".

Steely Dan were known as perfectionists in the recording studio, and this album is as clear an example as any in its discography: the recording process took two years and involved at least 42 different session musicians. Also interesting to note is that in a departure from its L.A.-centered studio work up until that point, the band recorded Gaucho in New York, using mostly East Coast musicians.

Morph the Cat
Buy on Amazon

This 2006 album is Donald Fagen’s third solo album. Fagen has said in interviews that the album deals with death; it was written in a post-9/11 world, Fagen’s mother had recently passed away, and he saw himself entering his twilight years. It won the Grammy Award for Best Surround Sound Album.

Our columnist Mickey K. will be taking over this series on the music of California starting from here on out. Stay tuned!