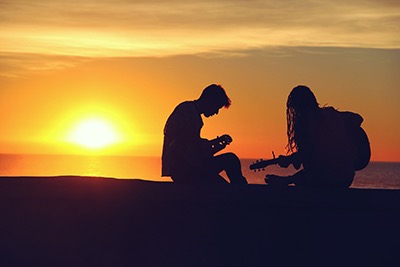 Over the next few articles I’ll be writing about some musicians that have deep ties to The Eagles: Jackson Browne and J. D. Souther, as well as Linda Ronstadt and Bonnie Raitt. But first, I’d like to cover the music of 1960s California.

2.The psychedelic rock sound that came out of the San Francisco Bay Area in the 60s

The second half of the 60s in America saw the rise of the hippie and counterculture movements, leading to the budding of various political and cultural phenomenon.

These subcultures began as youth movements in California—namely the San Francisco Bay Area. In terms of music, the region became the stomping grounds to bands like Jefferson Airplane and the Grateful Dead, which came to be known for their psychedelic rock sound.

Jefferson Airplane’s second studio album is its masterpiece, often considered the first album to truly capture the San Francisco psychedelic rock aesthetic. It took what was then a local sound and disseminated it to the rest of the country. Ranked 146th in Rolling Stone magazine’s “500 Greatest Albums of All Time". Grateful Dead guitarist Jerry Garcia also plays on the album, and is said to have been a “spiritual advisor".

The Grateful Dead’s first live album perfectly captures its legendary live sound, characterized by lengthy, winding improvisations. In 2003, the album was ranked 244th in Rolling Stone’s list of the “500 Greatest Albums of All Time”.

3.The Doors and the psychedelic rock sound of L.A.

While the San Francisco sound came to define the era, L.A. had its own school of psychedelic rock, perhaps best encapsulated in the band the Doors.

APA-Agency for the Performing Arts-management, Public domain, via Wikimedia Commons

The Doors’ debut album was its masterpiece. And that’s not intended to detract from any of their later work—the album is just that strong, with iconic songs like “Light My Fire” “Break on Through” and “The End”, the latter of which was used by director Francis Ford Coppola to haunting effect in his film Apocalypse Now (1979). In 2012, Rolling Stone magazine ranked this album 42nd in its list of the 500 Greatest Albums of All Time.

4.The End of the Hippie Movement

By the time the 60s came to an end, anti-hippie movements were starting to pick up around the country. Woodstock and the Altamont Speedway Free Festival, two massive outdoor music concerts held in 1969, would signal the end of an era—and the beginning of the end of psychedelic rock. In 1970, guitarist Jimi Hendrix and singer Janis Joplin would die of drug overdoses; The Doors frontman Jim Morrison would follow in 1971.

Jimi Hendrix’s historic debut album would set the direction of all rock music that followed, and just as important, his playing broadened the horizon of what the electric guitar could do. Rolling Stone magazine has ranked it 15th in its list of the “500 Greatest Albums of All Time".

Joplin’s second solo album was released posthumously, and one of the songs remained an instrumental because she died before she could finish recording all of the vocals. Joplin’s voice is presented front and center in all of its glory by the album’s producer, Paul A. Rothchild, who was also known for producing The Doors’ studio albums.

This is the director’s cut of a 1970 documentary of the Woodstock Festival (it’s reedited and adds a number of key performances to the original). The film won Best Documentary Feature at the 43th Academy Awards, and set the tone for concert films to come. Martin Scorsese is credited as an editor on the film.

This documentary captures the final concert of the American/Canadian rock band The Band, which came to prominence backing up Bob Dylan in concert.

This 2-disc album features some of the best performances from the Woodstock Festival.

This two-disc best-of compilation put together to commemorate the band’s 40th anniversary features 40 tracks that span its entire career.

Directed by Martin Scorsese, this film and live album chronicles the Stones’ charity concerts performed at the Beacon Theatre as part of its A Bigger Bang Tour.