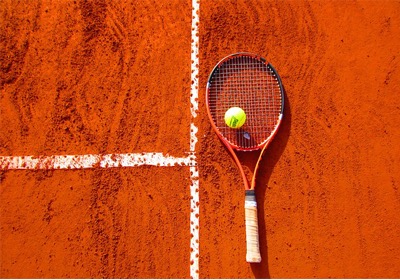 1.Prologue
2.My First Tennis Racket
3.From Beginner to Intermediate
4.My First Time Buying Two of the Same Racket
5.A Racket for Doubles Play
6.Shoes
7.Epilogue

As a translator, I spend most of my time at a desk, at the mercy of my computer. For years I was out of exercise, and that lifestyle took a toll on my body—I developed chronic back problems and had trouble sitting down for a prolonged period of time.

Not content to be desk-ridden for the rest of my days, around four years ago I took up tennis.

As a native Californian, recreational sports have in one way or another been a part of my life since I was a kid—in my case, football, baseball, basketball, and skateboarding—but tennis was the first sport I truly threw myself into.

Under the advice of BigBrother, who explained to me that tennis was a sport where the fundamentals were especially important, I decided to get myself a private coach from day one.

The first thing tennis taught me was the importance of the gear you choose, and how well you take care of said gear. In my estimation, that’s one thing that sets it apart from sports like basketball or soccer, where all you need to get started is a ball sufficiently filled with air.

For our lessons we’ll rent a public court. When practicing alone, I would go to the famed tennis practice wall adjacent to the Tokyo Metropolitan Gymnasium, near the National Stadium in Sendagaya. (Unfortunately, this wall has been closed down as of the end of March 2018, due to construction on facilities for the 2020 Tokyo Olympics. It remains closed as of November 2020.)

The first task was to get myself a racket; initially I thought a beginner’s racket would be the way to go. I consulted BigBrother, who told me that if I was serious about tennis, I would be better served starting with a heavier racket meant for intermediate and advanced players. The idea was that the racket itself would “teach" me.

Although I was out of shape, the size of my frame meant that physical strength and arm power would not be limiting factors, so I opted for a 340 g racket—that is, specifically one with U.S. specs.

I had the racket, which has a tight 18×20 string pattern, strung with Wilson NXT 17 multifilament strings at 45 lbs.

And as for my overgrip, I sweat quite a bit from my hands, so I went with Tourna Grip. It’s a favorite of the pros, and I’d also found myself oddly calmed by the sight of the French player Richard Gasquet re-gripping his racket during changeovers.

In the beginning I was using my arm alone to hit the ball, from backswing to follow through. My coach had to repeatedly remind me to use the weight of the racket itself, and a proper unit turn, to execute my groundstrokes. The concept took a while for me to grasp.

3.From Beginner to Intermediate

About two years in, my groundstrokes finally became passably reliable, and I got myself a Wilson Pro Staff 90. This racket was developed for Roger Federer, but he ended up barely using it in match play.

And perhaps that isn’t surprising—it has an unforgivingly small 90 in2 racket head. But when you make contact with the sweet spot, the feeling is absolutely sublime.

I kept the tension of my strings low in order to teach myself by feel—how to meet the ball with the sweet spot, and how to “crush" the ball.

4.My First Time Buying Two of the Same Racket

About a year ago, once I’d gotten a feel for crushing the ball and driving through my strokes, I bought a pair of Wilson Pro Staff RF97 Autographs (340g / 16×18)—Roger Federer’s signature racket.

I’ve been trying a number of hybrid string setups, using mostly polys like Luxilon ALU Power (also used by Federer and other players like Novak Djokovic in their hybrid setups), Technifibre Black Code (1.18 mm), and Red Code (1.20 mm)—the latter is used by the American player John Isner, who recently won the Miami Open, his first ATP Masters 1000 title. Right now I’m using two Gosen strings, the Polybreak 18 (which is hard to obtain in Japan) and a multifilament called AK Pro CX 17, both at 47 lbs.

I’m still experimenting, so I have the mains and crosses reversed between my rackets, and I mostly use one or the other depending on the weather or how I’m feeling physically.

5.A Racket for Doubles Play

Recently I’ve been playing more and more doubles, so I have two YONEX VCORE Duel G 97s (330 g), the racket endorsed by the Swiss player Stan Wawrinka. Here in Japan the “heavier" version of the racket weighs in at just 310 g, which is a little too light for my liking, so I purchased two 330 g rackets on a recent trip back home to California.

I’ve re-gripped both with Wilson Premium Leather Replacements Grips, so they currently weigh in at about 340 g each.

As for the strings, I have one strung with BABOLAT RPM Blast (1.20 mm) at 47 lbs, and the other with YONEX Polytour Fire (1.20 mm), also at 47 lbs. The former is the string of choice for both Wawrinka himself and the Spanish player Rafael Nadal, and the latter is used by the German player Angelique Kerber.

For these two rackets I use gray Luxilon Elite Dry overgrips, which just came out in 2017 and have quickly become a favorite of mine. (I bought a 30-pack on my California visit.)

The vibration dampener I use is the Kimony Quake Buster, which is a favorite of Japanese player Nishikori Kei. It’s available in a variety of colors, so I like to match them up with whatever strings I have on the racket.

When it comes to shoes, I’ve tried them all—Nike, Adidas, New Balance, Mizuno, etc.—but the shape of my foot is a bit wide like a lot of Japanese, so I’ve found that ASICS is the best fit for me.

In the U.S., hard courts are the norm, so I was taken aback when I first walked onto an omni court surface (sand-filled synthetic grass).

ASICS shoes fit wonderfully and offer great stability, and since footwork is one of my strengths, it’s important that I can trust my shoes to never fail me.

Whenever we’re out on a walk and we see someone with a solitary racket handle sticking out of their backpack, BigBrother will wonder aloud, “I don’t understand why they only carry around one racket. If their “gut" were to break (BigBrother calls strings “gut", a term that has stuck around since the days when natural gut—strings made of animal intestines—were the only strings available), they’re automatically done for the day."

Something else he’ll say is “Recreational players always use white overgrips because they see the pros using them on the TV. But most “to-shi-ros" (to-shi-ro is an argot word BigBrother uses for shirouto, which means novice or amateur), you’ll see them with a dirty, worn overgrip that they’ll use for as long as possible."

His advice to me? “Don’t expect to become any good if you aren’t making it a point to keep your “gut" and your overgrips in good condition, replacing them as necessary."