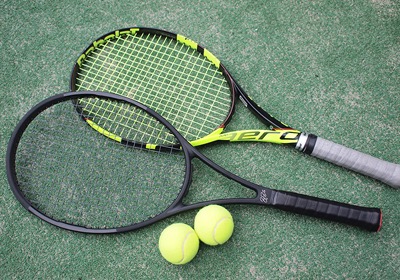 For those brave souls who have just decided to take up tennis, I imagine it must be shocking to walk into a store selling tennis equipment and be confronted by the vast array of available rackets.

A multitude of makers, each selling a multitude of rackets. The sight must simultaneously be surprising as well as cause for hesitation.

In addition, you will see rackets from a single maker with identical designs (paint jobs) and in actuality vary in terms of weight and grip size. Choosing a racket can be a difficult process, and not just for beginners.

Today I’d like to provide a primer to make the process a little less intimidating.

Head size refers to the size of the racket face—the frame and the strings—and is measured in square inches.

The sweet spot of a racket is the center of the string bed (or more recently, slightly above center), where the strings are able to be most effective. It’s also the part of the racket that gives you the best feel.

As a rule, the bigger the head size, the wider the sweet spot. However, there is a drawback: a racket with a wider sweet spot doesn’t give you quite the touch that a smaller one does.

These characteristics can also be seen in the major racket manufacturers. Babolat and Yonex rackets have a wider sweet spot, but they offer a slightly duller feel. On the other hand, Wilson and Head rackets have smaller sweet spots, but offer superb feel.

In terms of feel, the racket model, string type, and string tension also make a big difference when it comes to performance.

Rackets with thicker frames can sometimes be longer than 27 inches.

The Babolat Pure Drive, a popular club-level racket, is available in a model that is 0.5 inches longer than the standard. Tennis pro David Ferrer, who used Prince rackets for a long time, drew attention when he switched over to this slightly longer Babolat Pure Drive Plus at the tail end of his career.

Japanese tennis catalogs and online distributors usually list the weight of unstrung rackets in grams. Meanwhile, in the U.S., you will sometimes see the strung weight listed in ounces.

The majority of rackets fall between 250 and 330 grams, regardless of maker. Rackets for female players usually weigh in at around 280 grams, while for men there are many models over 310 grams.

There are those who recommend lighter models for beginners and female players, but for those who are serious about picking up tennis, I recommend getting a heavier racket in the 300 to 315 gram range to learn how to put your entire body into a swing.

Racket balance, or weight distribution, has a big influence on playing style. Head-light rackets, which are heavier on the grip end, offer a high degree of control, while head-heavy rackets make it easier to swing through the ball with power.

As a junior player, Nishikori Kei used a head-heavy racket in order to teach himself the kind of strokes that would allow him to go toe-to-toe with power-hitting foreign players.

Side note, a famous top-light racket is the racket used by Roger Federer.

There are many schools of thought when it comes to grip size. In general, thinner grips involve more wrist action, while thicker grips make it harder to use your wrist.

As for Japanese players, my impression is that many women use a size 1, while many men use a size 2. Meanwhile in America there are many players who use a size 4 or 5. And word is that Roger Federer uses a size 2.

Recently it seems that players tend to go for something in-between.
A racket with a typical box beam frame is the Wilson Pro Staff used by Roger Federer, while the Babolat Pure Aero used by Nadal is more rounded, and the Head Speed Pro used by Novak Djokovic is somewhere in the middle.

And box beam rackets have very small sweet spots, but I contend that the feeling of hitting a ball in that sweet spot is one of the great pleasures of the sport.

A racket’s performance also depends on the thickness of the beam.

Thicker, oversize rackets with a 30mm or so beam are stiff, allowing the player to generate more power. The sweet spot is relatively big, making them easy to recommend to seasoned seniors over 50 who play doubles.

Thinner rackets with a beam around 20 mm are more flexible, and can be used to hit the ball like a whip. A typical example is Roger Federer’s Wilson Pro Staff RF97 Autograph, which has a 21.5 mm beam.

In general, medium beams around 25 mm are popular.

A racket’s characteristics are also determined by the string pattern—the layout of the string bed.

The vertical strings, called “mains", determine how the ball flies and how much spin you can impart. Meanwhile, the horizontal strings, called “crosses", affect feel. (* I will talk more about strings in the next column in this series.)

The most common string pattern is 16×19 (16 mains and 19 crosses). Some rackets have 18×20, which gives you more control and slightly less power. Tennis pro Grigor Dimitrov uses a Wilson Pro Staff 97S, which has a 18×17 string pattern that imparts a lot of spin (hence the “S").

In the Japanese tennis racket industry, there is this idea of the “golden" specs for a racket—basically the ideal specs for the average player.

What this usually refers to is the specs of the Babolat Pure Drive, which is very popular among a wide range of tennis players.

In the U.S., tennis players come in all shapes and sizes. The idea of there being “golden" specs is a one-size-fits-all mentality that is distinctly Japanese.

(Note: Rackets can vary wildly in terms of these parameters. (Especially in regards to rackets sold overseas.) For those who are particular about their specs, I recommend buying not through online shopping but by going to an actual store.)

●Rackets that fall into the “golden" spec range

SPORTS & CULTURE #004 will be part two of my introduction to tennis rackets. I’ll be covering the different types of strings and the various specs to be aware of when deciding on what string (or strings) is right for you.