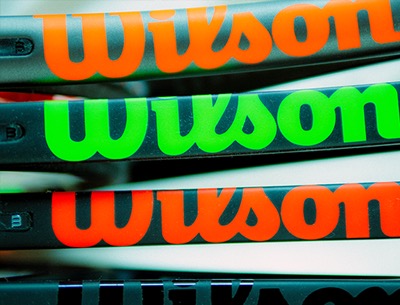 On Tennis Racket Makers (1)
- Wilson: For Those Who Favor a Classic Playing Style

Most of the professional tennis players active on pro tennis circuits use rackets from one of four brands: Wilson, Head, Babolat, and Yonex.

These four have made a name for themselves by manufacturing superior quality rackets and promoting their brands through racket sponsorships and the financial support they provide players.

At the club level you’ll also come across rackets from popular brands like Prince, Dunlop, and Tecnifibre. In this series of columns I will go over the racket concepts and the different types of rackets offered by Wilson, Head, Babolat, Yonex, and Prince.

2.The Classic Player’s Rackets Made by Wilson

It’s not an exaggeration to say that Wilson tennis rackets are part of tennis history. Iconic players that have used Wilson rackets include Jimmy Connors in the 70s, Stefan Edberg in the 80s, Pete Sampras in the 90s, and Roger Federer since the 2000s.

On the women’s tour, players like Chris Evert and Steffi Graf are known for having used Wilson rackets in the past. Currently, the Williams sisters (Venus and Serena) do battle with Wilson rackets.

Wilson rackets are known for being classic player’s rackets, a heritage embodied by their box-beam Pro Staff line.

Pro Staff rackets are great for players who execute a proper unit turn on their swings and have the skill to meet the ball with the sweet spot of the string bed. They allow players to hit flat groundstrokes with control and precision.

Over the years, Wilson has refined its other racket lines as well: the well-balanced Blade series, the powerful Burn series, and the Ultra series, known for its plow through.

What’s more, Wilson offers a wide selection of rackets for kids and junior players, as well as older veterans of the game.

At 97 square inches, Pro Staff rackets have a relatively compact racket face and an exceedingly small sweet spot, but in terms of feel and control, they are unmatched.

For those serious about improving their tennis game, I recommend trying out a Pro Staff 97 Counterveil (315 g) at least once. “Counterveil" is a new, innovative composite material recognized by NASA that minimizes vibration, thus reducing muscle fatigue.

For advanced players, I recommend having a hit with a Pro Staff RF 97 Autograph (340 g) strung with natural strings at least once in your lifetime.

Side note: many of the rackets used by the pros have different specs from the ones that are made available commercially; the Pro Staff RF 97 Autograph, on the other hand, is the racket used by Roger Federer. It’s a great way to experience what a pro racket can actually do.

I also give high marks to the Pro Staff 97 S, which used to be endorsed by Grigor Dimitrov but is now getting hard to obtain. It retains the great control of the Pro Staff line but adds the power and spin of an “S" racket. I’d recommend it to a wide range of tennis players.

The Blade series is designed for a wider range of modern players than the classic Pro Staff series. Its sweet spot is slightly larger, and it’s easier to impart spin on the ball.

Blade rackets come in a good variety of weights and string patterns, making it easy to find the model that is right for you.

On the men’s tour, players like David Goffin and Milos Raonic endorse the Blade 98 Counterveil (18×20)—although they most likely play with rackets that are heavier and stiffer. This racket is one of the best out there for intermediate and advanced players.

The Blade 98 Counterveil with 16×18 string pattern is great at imparting spin and launching the ball with considerable power, making it a good choice for beginners and intermediate players.

For women who are serious about tennis—both singles and doubles—I recommend giving the Blade SW104 Autograph Counterveil a try. The SW 104 is Serena Williams’ racket of choice—a well-balanced weapon that offers both power and control. The Counterveil technology reduces vibration, meaning less strain on your wrist and elbow.

The Burn series, which used to be endorsed by Nishikori Kei, sets itself apart from the traditional Pro Staff and popular Blade with a winning combination of power, speed, and spin.

Both the Pro Staff and the Blade have slightly more flexibility in the beams, while the Burn is stiff and light—making it an ideal weapon for players who like to impart a lot of topspin.

The Burn series includes models that are exclusive to Japan. And the top-heavy Burn 95J Counterveil, a racket based on the one Nishikori used as a junior, is a good option for Japanese players at the high school level who have a shorter frame.

The Burn 100S is a fine example of what Wilson’s Spin Effect technology can do. String it with a smooth string with a circular cross-section that creates lots of snapback, such as Tecnifibre’s Red Code Wax.

The Burn 100S is currently endorsed by Nex-Gen player Andrey Rublev; on the women’s tour it is endorsed by 2018 WTA Finals champion Elina Svitolina.

The Ultra series offers great stability and force through your swing, and is easy to maneuver around the net. The rackets are easy to handle and are designed for “all courters".

The rackets are loaded with power and spin, and come in a variety of head sizes and weights—making them great for beginners, older players, veterans, and doubles players.

The Ultra 95 Counterveil is endorsed by Nishikori Kei, who has had trouble with wrist issues in recent years. Its specs are nearly identical to Nishikori’s previous racket, the Burn 95 Counterveil, only with a slightly softer touch. This racket is arguably the best showcase for Wilson’s Counterveil technology. Even if your shots are off-center, the strain on your wrists is minimized.

The Ultra Tour is endorsed by Gael Monfils, as well as a number of players ranked around 100th in the world. On the women’s tour, it is endorsed by Madison Keys. I recommend this racket for Japanese high school players and college athletes who are serious about becoming a professional tennis player. (Again, the models used by the pros have different specs from the ones that are commercially available.)

Wilson also makes the Triad series of rackets, which are power-oriented rackets for veterans and older players, and offers a number of different rackets for junior players.

The Wilson brand is also known for making sports equipment for American football, baseball, basketball, soccer, badminton, volleyball, and more. But today the brand is perhaps best known as the manufacturer of “Wilson", the volleyball that Tom Hanks befriends on a desolate island in the film Cast Away.

In my upcoming entries I will also cover rackets made by Head, Babolat, Yonex, and Prince. Until then!

On Tennis Racket Makers (1) - Wilson: For Those Who Favor a Classic Playing Style