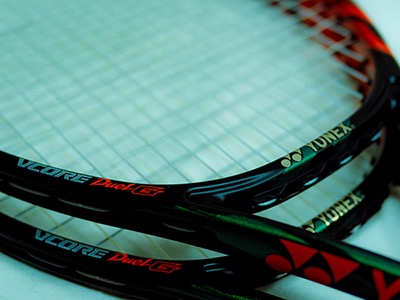 On Tennis Racket Makers (4)
- Yonex: Made in Japan Excellence

In our series on leading tennis racket manufacturers, we’ve covered the American brand Wilson, the Dutch brand Head, and the French brand Babolat. This time I’m writing about the Japanese brand Yonex, which is known for its sponsorships of several young players on the rise.

Yonex is a leading Japanese tennis racket manufacturer that is known for its sponsorships of players like Naomi Osaka. (Yonex also makes quality rackets for soft tennis and badminton, as well as golf clubs.)

In the 80s, Yonex provided rackets for Martina Navratilova; in the 90s, Monica Seles; in the 00s, Martina Hingis; in Japan, Yonex rackets were used by Date Kimiko.

Yonex has also made it a core part of its brand to support up-and-coming junior players both in Japan and around the world. In recent years, a number of top-ranking players on the men’s tour are also using Yonex rackets.

Another Yonex player on the women’s tour is Angelique Kerber, who endorses the VCore 100.

Yonex also has a great lineup of junior rackets for beginners and intermediate players.

The brand’s rackets have a distinctive trapezoidal frame (isometric technology) that enlarges the sweet spot. They handle well and can be easily swung through the air, and are especially popular with female players.

The 305 g EZone 98 is not as stable as other heavier rackets, but it has superior response and handling. It has a large sweet spot and offers great control—making it the perfect weapon for players who take big swings at the ball.

This racket is why Nick Kyrgios is able to generate such “EZ" power with minimal effort, and why Naomi Osaka is able to dominate her opponents with power tennis.

Belinda Bencic, who defeated rival Naomi Osaka three times in 2019, uses the EZone 100, which has a slightly larger racket head.

Angelique Kerber endorses the VCore 100, a racket that imparts a powerful spin on the ball. It pairs well with the Yonex Poly Tour Fire string. (Professional tennis players endorse certain rackets but actually use rackets that have specs that are significantly different from the models that are commercially available.)

The racket also features an aerodynamic design that reduces the friction on the inside of the frame as it passes through the air, so that the player can accelerate into their swing. That, in turn, allows skilled baseliners to hit precise shots that drop just inside the court.

Canadian Nex-Gen player Denis Shapovalov endorses the VCore 95, which has a smaller racket head than the VCore 100. The racket has a flexible frame that lacks power but is a formidable weapon in the hands of a player like Shapovalov who has large, pronounced strokes.

This Yonex racket that doesn’t feel like a traditional Yonex racket was designed for heavy hitter Stan Wawrinka.

The 330 g version, which is not available in Japan, is a monster of a weapon that is best handled by players who are able to consistently crush the ball.

For players with a proper swing, this racket also offers great feel and control.

The V Core Pro 97 (310 g), which is 20 g lighter doesn’t give you the kind of heavy ball that you can get off its big brother, but it is easier to handle. It is endorsed by players like South Korean player Chung Hyeon and American player Francis Tiafoe.

Yonex also has a reputation for its strings. Its lineup includes strings suited for players of all levels, from beginners to pros.

The Aeron Super 850 is a multifilament that is a good choice for beginners, intermediate, and experienced players. It is very soft on the arm—great for players with wrist or elbow trouble. The Poly Tour Pro 120 is one of the softest polyester strings out there, and is a great choice for high school or intercollegiate players who are serious about their training. The cool color doesn’t hurt, either. Nick Kyrgios uses the 120, while Naomi Osaka uses the 125.

For those who like to play with a lot of spin, I recommend the cobalt blue Poly Tour Spin 120.

For players who are skilled at crushing the ball with the sweet spot of their racket, I recommend the Poly Tour Fire 120, which is used by Angelique Kerber. This string also works in a hybrid setup with the VS Touch Natural Gut from Babolat.

Going through the roster of players who use Yonex rackets, it becomes clear how the brand has made it a core part of their long-term business strategy to cultivate young, up-and-coming talent.

From tennis prodigies like Monica Seles and Martina Hingis, and influential Japanese players like Date Kimiko, to players like Belinda Bencic and Naomi Osaka, Yonex has built trust in its brand by supporting these players from a young age.

In Osaka’s case, Yonex has supported her since she was about ten years old. While she was training in Florida, her mother sent a letter to then company president Yoneyama Tsutomu (the name “Yonex" is an abbreviation of Yoneyama) asking for support in terms of equipment and gear. A representative from the company’s U.S. branch went to see Osaka play in a tournament, saw potential in her raw power, and the rest is history.

In 2018, Osaka would win the U.S. Open, and follow it up by winning the Australian Open and achieving the world No. 1 ranking in January 2019. To commemorate her achievements, Yonex released a special limited edition gold version of the EZone 98 this past fall.

Since 2011, Yonex has also hosted Yonex Vamos J, a training camp focused on helping young players establish the foundation for a successful career in tennis. In recent years the camp has been held not only in Japan but also in the U.S., Germany, the U.K., China, and Thailand.

It’s not hard to see those young players becoming lifelong fans of the unique look and feel of Yonex rackets.

Yonex: Made in Japan Excellence － On Tennis Racket Makers (4)