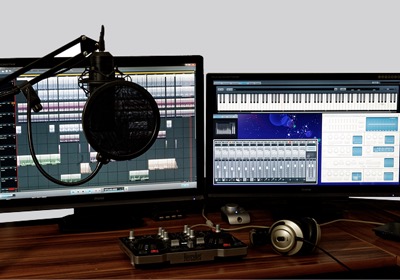 In DTM, there are many ways and styles to produce music. Today I’d like to give a run through what I like to do.

These days, the bar to entry for DTM is low. If you own a Mac, you could begin today. Indeed, I too started by playing around with the GarageBand app that came pre-installed on my Mac Book Pro.

GarageBand has a straightforward interface that makes it easy to manipulate sounds. To this day I use GarageBand to make the foundation for any tracks.

Any projects I create in GarageBand can be loaded in Logic Pro, a pro-use DAW (digital audio workstation) program, and that’s where I like to work the details.

Logic Pro already comes with a range of plugins (software components that expand the functionality of a DAW), but I’ve added the plugins from Waves Gold Bundle to my setup. This allows me to tweak and adjust my sounds in a variety of ways.

As for sounds and loops (prerecorded audio clips that serve as building blocks), I like to purchase and download them from a site called SONICWIRE.

Regarding USB cables, many maintain that cheap alternatives don’t effect the sound quality in any way, but I like to use Oyaide Elec. d+ USB Class A rev.2, a mid-range USB cable.

Mackie products are known for their high durability and “fat" sound. As such, they’re often used for outdoor raves and the like.

From my Mackie mixer, I use another pair of Oyaide Elec. QAC-222 / XLR cables to connect to a pair of Yamaha HS8 powered monitor speakers.

Oyaide Elec. Cables in every price range provide a balanced sound from the lows to the highs, with unimpeded signal transmission.

Of the HS series speakers, the HS8 is particularly clear on the low end, which makes it the ideal monitor speaker for four-on-the-floor dance music type tracks.

The “red line" headphones are great for listening to vocals and other sounds in the mid range, while the blue line headphones are clearer on the low end.

Because the kick drum (which defines the rhythm) is integral in dance music, I’d recommend the “blue line" for monitoring purposes.

As for the power...that’s a bottomless rabbit hole if I’ve ever seen one, so I use a Furman SS6B, which I connect to a regular power outlet in my house (three-prong grounded).

When it comes to audio equipment, there’s always something more expensive, with higher specs, and better reviews.

For me, I leave the final mixdown and mastering to a specialist, so I’m happy with the sound system I currently have.

And I use this system not just for DTM, but for my own private listening, as well as for events.

The preamp (gain—which controls what comes “in" to your mixer) on the Mackie mixer gives the sound plenty of umph, so all you have to do is raise the output level on your CD player or DJ mixer, and the sound will take on new life—especially the four-on-the-floor variety.

In compact venues such as a cafe, this setup should be enough to put on a decent night of music and dancing.

Since he found out outboard equipment that had once cost hundreds of thousands or millions of yen could be purchased as DTM software plugins for a few thousand yen, BigBrother has often lamented that “We live in the kind of times track-makers wouldn’t have dreamed of, yet I don’t think I’ve heard any intriguing sounds as of late."

Of course, plugins are digital simulations, so they aren’t a perfect imitation when it comes down to the details. However, BigBrother says that they capture the unique characteristics of each external effect unit quite well.

And that’s why any files that I make DTM-style, I’ll have mastered on analog equipment first.