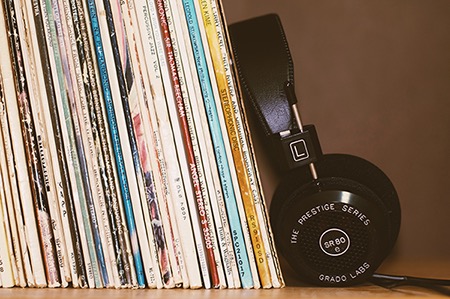 To experience great sound under a modest budget, we recommend listening to these albums on the kind of sound system we covered in GEAR & BUSINESS #004.

This all begs the question, what is “great sound”, and what is a “quality audio recording”? Generally speaking, there are two ways to look at this.

By contrast, for professional musicians and sound engineers—those who produce music—or audiophiles, good sound quality refers to the way music has been recorded or mastered in the studio, or the way it is reproduced through speakers. A good quality sound recording faithfully recreates the sound that those who produced the music heard in the recording studio. That all depends on microphone positioning, sound quality, dynamic range, resolution, the sound image, and more. A high sound quality recording captures everything from the highest sounds to the lowest sounds being produced. Dynamic range refers to the range between the quietest and the loudest parts in a music recording. High resolution recordings allow you to make out different instruments clearly—for example, when you listen to a song you love on a good sound system and realize elements of the song you had never noticed before. Finally, sound image refers to the way music sounds when coming from stereo speakers—for example, with the vocals out in front, the guitar coming out of the right side, and bass coming out of the left. A high resolution sound recording might sound as if the musicians are playing right in front of you, but it does not necessarily mean the music is “easy on the ears”.

If you listen to properly recorded music through a well-balanced amp, studio monitor speakers, and high quality cables, you should essentially be hearing what the sound engineer was listening to in the recording studio—and theoretically, what the musicians intended. On the other hand, if you’re listening to the same music out of your built-in laptop speakers or the earbuds that came along with your smartphone, the quality of the recording means very little, and at some point it becomes questionable that what you’re doing can truly be characterized as “listening” to music.

In this article I’ve put together a list of pop and rock albums that have either been recognized for their sound quality—such as through winning a Grammy Award—or are available in hi-definition CD formats.

In 1966, the Beach Boys released Pet Sounds, its magnum opus, and stunned musicians around the world. Brian Wilson, who wrote and arranged all of the songs and produced the album, made the album after resigning from live performances for an indefinite period of time. He brought orchestral sounds into pop music in an attempt to create “the greatest rock album ever made".

After the disco craze of the 70s, dance pop came into vogue in the 80s. Michael Jackson gradually moved away from his R&B roots into full-blown pop superstardom. His 1985 album Thriller and 1987’s Bad were produced by Quincy Jones, a former jazz conductor with a superior ear for sound quality.

Natalie Imbruglia - Left of the Middle
Buy on Amazon

In the 2000s and 2010s, hip hop and EDM became an essential part of pop music’s DNA. At the same time, a disco and dance pop revival meant that a lot of the pop music being produced would feel like it came out of the 70s and 80s.

Billie Eilish - When We All Fall Asleep, Where Do We Go?
Buy on Amazon

In rock, English bands like The Beatles, The Rolling Stones, Led Zeppelin, and Pink Floyd experimented in the studio and produced some of the best-sounding rock to have ever been created—much of their work continues to be remastered and re-released today. Abbey Road Studios, where The Beatles recorded, is perhaps the most famous recording studio in the world.

How the West Was Won
Buy on Amazon

Echoes: the Best of Pink Floyd
Buy on Amazon

Dark Side of the Moon
Buy on Amazon

Wish You Were Here
Buy on Amazon

The Wall
Buy on Amazon

Queen - Jewels: The Very Best of Queen
Buy on Amazon

18 Singles: The Best of U2
Buy on Amazon

U2 - Joshua Tree
Buy on Amazon

Bon Jovi - Wild in the Streets
Buy on Amazon

AOR stands for adult oriented rock, a genre that came to prominence in the 80s that is often derisively referred to as soft rock or yacht rock. By bringing elements of jazz and soul music into rock, it made the genre decisively less edgy, but smooth as butter. AOR music is also great for seaside drives.

Bobby Caldwell - Cat in the Hat
Buy on Amazon

Revolutions: The Very Best of Steve Winwood
Buy on Amazon

West Coast rock is a predominantly Japanese term that is used to refer to rock musicians from the West Coast (chiefly California) and the music they produced in the late 60s, 70s, and 80s.

The Best of the Eagles
Buy on Amazon

The Best of Jackson Browne
Buy on Amazon

The Very Best of Linda Rondstadt
Buy on Amazon

Blues rock and folk rock bring elements of blues and country music into rock. These genres would later evolve into southern rock and roots rock.

Shania Twain - Come On Over
Buy on Amazon

The Band
Buy on Amazon

Delaney & Bonnie - On Tour With Eric Clapton
Buy on Amazon

I Still Do
Buy on Amazon

Many of the albums I’ve listed in this article have either won or been nominated for the Grammy Award for Best Engineered Album. Introduced in 1959, the Best Engineered Album award is split into two subcategories: classical, and non-classical. As this distinction suggests, no one is more particular about sound quality than fans of classical music. That should come as no surprise—classical music has a significantly older history than pop, rock, blues, R&B, folk, or jazz. It is classical music that has driven many of the important developments in music recording and playback technology. There’s even a story about how CD’s have a recording capacity of 74 minutes because Sony president Oga Norio wanted to be able to fit a recording of Von Karajan and the Berlin Philharmonic performing Beethoven’s “The Symphony No. 9 in D minor, Op. 125" on one disc. (Today some CDs have a capacity of 80 minutes.)

Looking at the nominees for the Non-classical subcategory, it’s immediately clear that the majority of the albums are not pop or rock, but jazz. Jazz developed in the American South out of Black folk music and European classical music, and is known for its challenging nature. In contrast, pop and rock are forms of popular music, and as such are generally not recorded with the intention of being listened to through high-end sound equipment. Instead, pop and rock is played on home stereo systems and laptop speakers, earbuds and car radios. Even aesthetically, rock is about noise and edgy expression—the antithesis of “easy on the ears".

Still, there are pop and rock albums that are highly regarded for their sound quality. In the 60s, bands like The Beatles and the Beach Boys experimented in the studio until they had just the sound they were looking for. In the 70s, progressive rock bands like Pink Floyd brought jazz and classical music influences into rock. Meanwhile, in the U.S., bands like Steely Dan were doing something similar, not to mention Donald Fagen and Walter Becker’s reputation for being perfectionists in the studio.

Then there’s Japan, where there exists two extremes: a passionate market for classical music and high-end audio equipment on the one hand, and the J-pop loving masses on the other. The former enjoys high-definition CDs and high-resolution digital files at home in a dedicated listening room; the latter listens to MP3-quality files on their smartphone while taking the train to school or work. What’s more, a certain subset of Japanese audiophiles are actually obsessed with pop idols and anime song artists, and pianists and violinists known more for their looks than their musicianship.

The skill and expertise of sound engineers is another important factor. Many of the engineers who work in J-pop grew up listening to music as something that accompanied TV shows; while vocational school taught them all the types of techniques you can find in a textbook, they have never cultivated a feel for or familiarity with “good music" and “good sound quality". It’s also significant that J-pop is not about instrumentation or beats, but about vocals—and rather weak vocals, at that. An engineer must significantly alter the balance of a track in order to ensure that the vocals are not buried under the music.

Pop and rock music today, whether it’s from the U.S., U.K., or Japan, heavily incorporates elements of hip hop and dance music like disco, house music, and EDM. Next time in this series we will feature Black music, EDM, and world music recordings with superior sound quality.